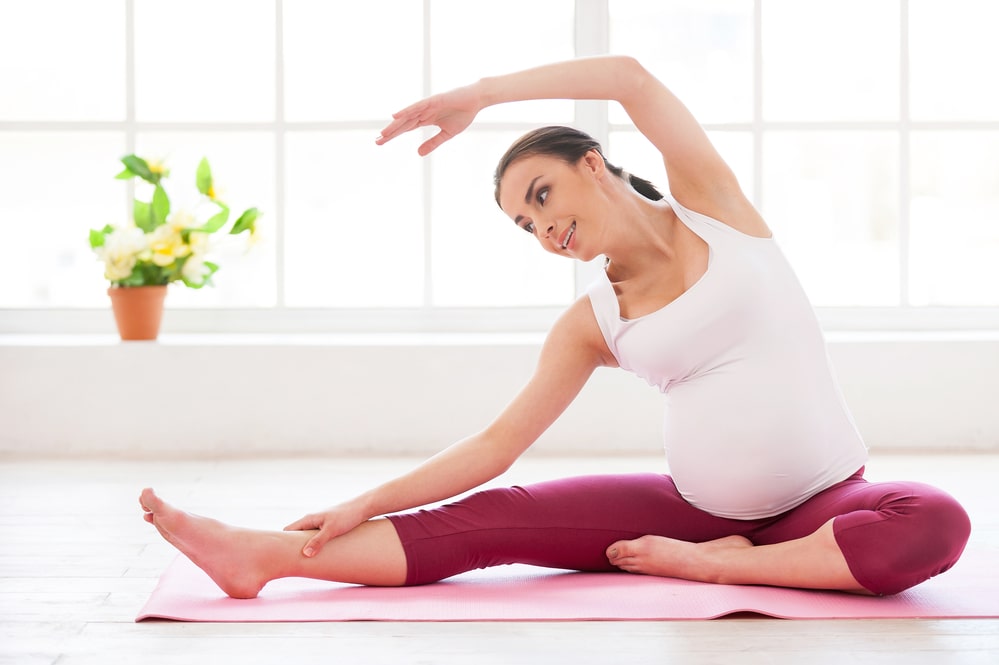 A woman’s body goes through a copious amount of changes during pregnancy—and at a fast pace. Some of these changes are apparent, such as the belly expanding and sore breasts, while some are hormonal changes that are invisible to the eye. These changes can cause anxiety to women.

According to a study, practicing prenatal yoga helps women reduce psychological distress, improve their relaxation, and prepare for labor. As a yoga teacher, you need to know how to adjust when a pregnant woman attends your class.

This article will explore how yoga can help pregnant women and the tips on how to teach prenatal yoga per trimester.

Yoga has so many benefits, but for pregnant women, it has additional ones that support the woman’s body as it goes through an accelerated pace of change. Here are some of the benefits of prenatal yoga.

However, their sleep quality drastically goes down because of disturbances, such as the frequent need to take a pee at night and physical discomfort.

Prepares the Body for Delivery

Physical activities increase flexibility and strength. Strengthening the body, especially the core and pelvic floor, helps in making the delivery easier. Doing this also helps prevent diastasis recti, or separation of the core, which is common after childbirth.

Physical discomfort is prevalent during pregnancy when your body goes through a lot of changes. Backaches, headaches, and leg cramps are some of the most common physical pains pregnant women face. Gentle yoga postures help in easing them.

Mentally Prepares You for the New Baby 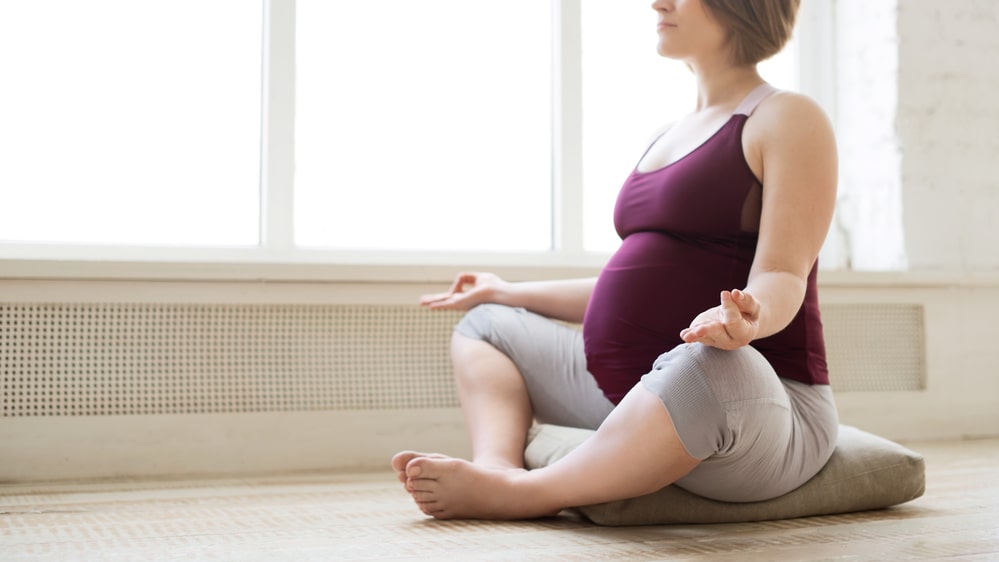 Pregnancy can take a toll not just on your physical health but also on your mental health. Prenatal depression is not as common as postpartum depression, but it happens. Most women experience depression during pregnancy, but it often goes unnoticed and thus unreported.

Many scientific studies support yoga as a treatment for reducing symptoms of anxiety and depression. Practicing yoga stabilizes the mood and helps you to stay calm and present.

Where to Begin in Prenatal Yoga

When teaching prenatal yoga, we need to consider the yoga student’s unique biomechanics and specific pregnancy and complications, if there are any. Always ask the pregnant yoga student if their doctor has cleared them to practice yoga.

Many students will ask you if they can do yoga while pregnant before asking their doctors. But you are not a medical professional, and you don’t know their pregnancy, so always refer them to their doctor. If you don’t feel your skill as a yoga teacher is not enough to guide them safely, direct them to another yoga teacher.

Tips on How to Teach Prenatal Yoga Per Trimester

A normal full-term pregnancy can range from 37 to 42 weeks. It is divided into three trimesters. Each trimester lasts three months or 12 to 14 weeks.

The first trimester is the earliest stage of pregnancy. Although changes to your body may not be evident yet, they are happening. Here are tips on how to teach pregnant women during their first trimester. 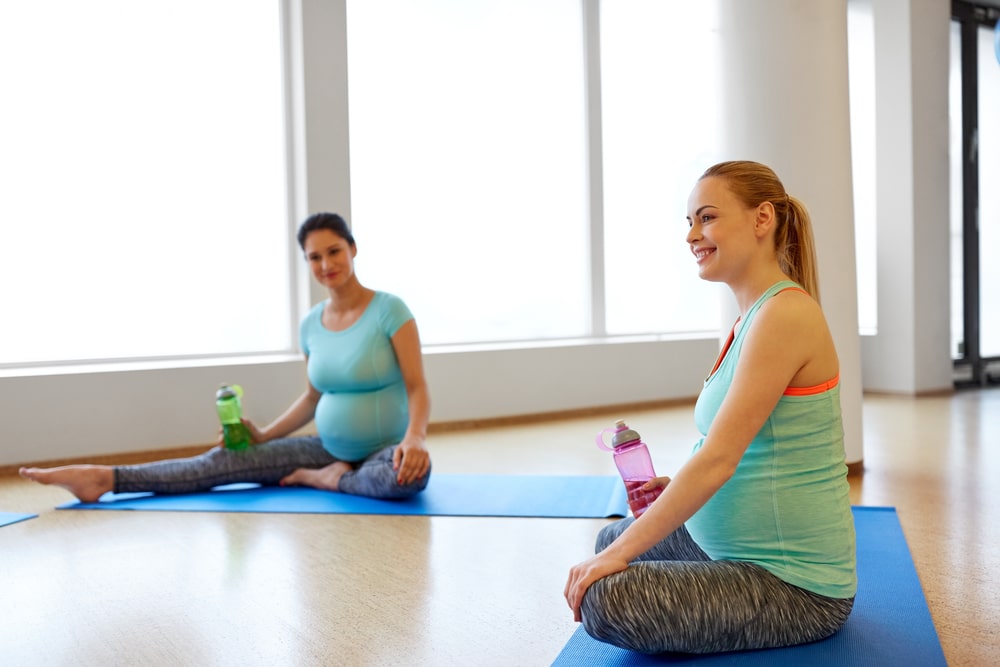 Many women feel extreme exhaustion during the first trimester of their pregnancy. Let them know that they are allowed to take breaks during the class. Let them do Child’s Pose or Savasana during breaks.

Nausea and dizziness are very common during the first trimester. These can be exacerbated when practicing Vinyasa flows and moving quickly from one pose to another. Let the student flow slower than others when they feel dizzy.

Let them Do What Feels Comfortable

In the first trimester, women will most likely pee a lot more than before pregnancy. Encourage the student to avoid holding it in and allow them to go for bathroom breaks as much as they like.

Use a Chair or the Wall

When in standing poses, allow the student to use a chair or the wall to be safe as they may feel dizzy and lose their balance.

Focus on hip openers to mobilize the hip during labor. 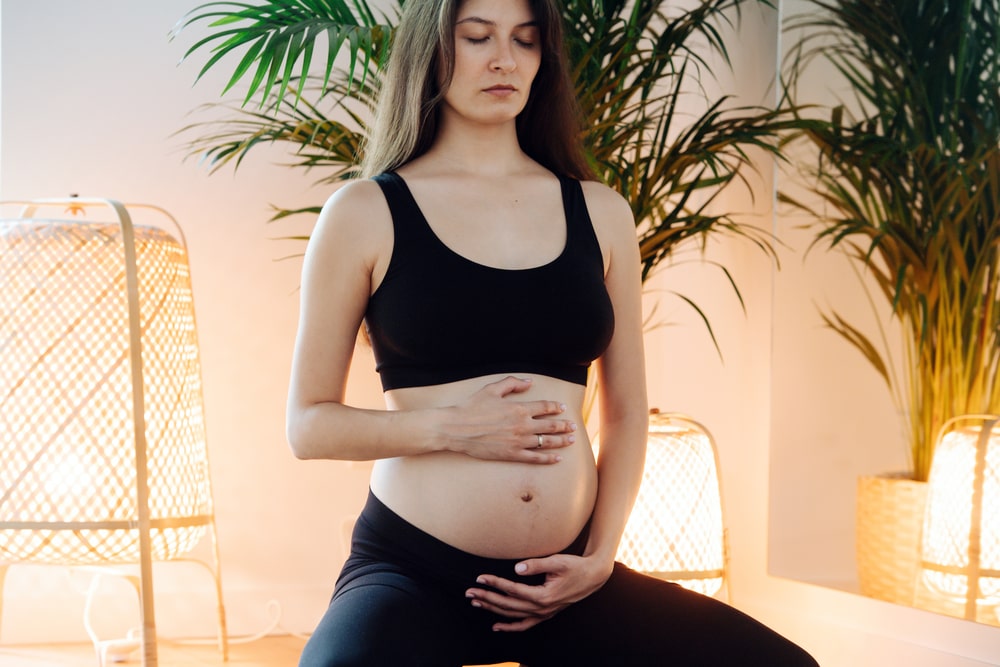 Begin focusing more on the pelvic floor. Pregnancy and birth can damage it. It’s best to strengthen it to lower the risk of damage.

Yoga Poses and Pranayama to Avoid

Inversions can trigger nausea and dizziness. If the student wants to try inversion, have them do basic inversions instead, such as Downward-Facing Dog or Dolphin Pose.

Asymmetrical standing poses like Warrior 1 and Warrior 2, any Triangle Pose variation, and Pyramid Pose must be avoided especially if the woman feels pain in the sacroiliac joint.

Avoid doing intense core work especially when the student is a beginner yogi, as it may put too much pressure on the uterus.

Avoid backbend poses as they may overstretch the abdominal muscles.

Avoid Pranayama that involves pumping the belly, such as Kapalbhati.

In the second trimester of pregnancy, physical changes in the woman’s body are evident, while the hormone levels are now more stable and balanced compared to the first trimester. The belly and breasts start to grow bigger. Your pregnant yoga student may have more energy now as well. However, yoga poses will need to be modified to accommodate the growing belly. 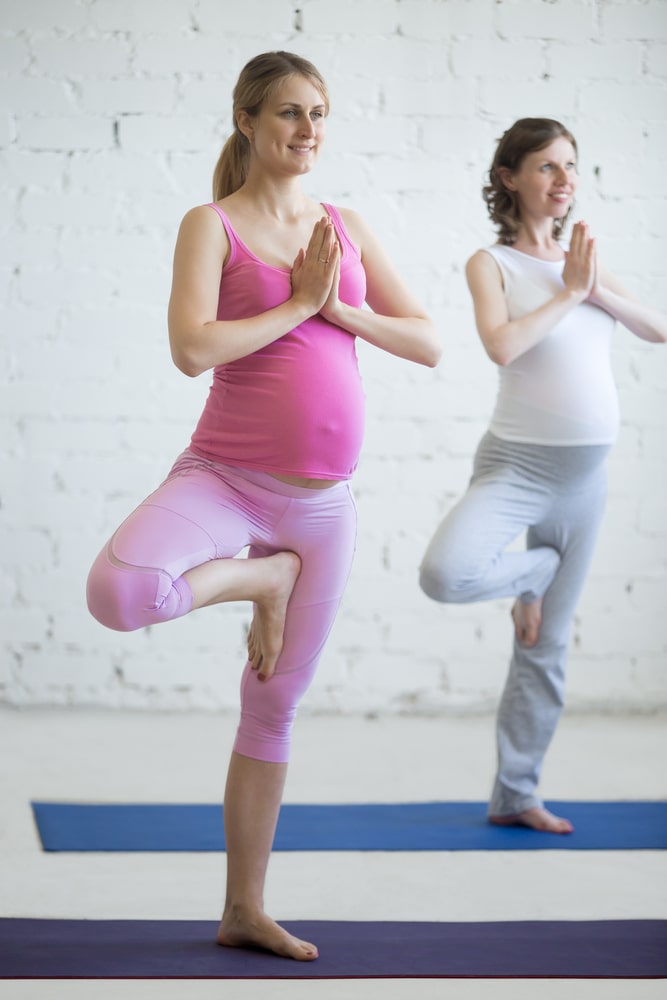 Standing poses will need to be done carefully as the center of gravity changes during the second trimester, caused by the growing belly. If possible, standing poses should be done with a chair for support or close to the wall.

Invite More Awareness to the Back

During the second trimester, invite the student to bring more awareness to her back when in a supine position. Because of the growing belly, lying on the back may put pressure on the back, resulting in numbness.

Continue avoiding movements that put too much pressure on the belly, such as Locust Pose, Cobra Pose, and Bow Pose.

Bring More Awareness to the Pelvis

Always bring more awareness to the pelvis, especially in keeping it in a neutral position.

Guide the pregnant student to do more hip openers. This will prepare her body for labor and birth. Incorporate squats in your class to strengthen the hip abductors and glutes of the student.

If inversions are part of the pregnant yoga student’s practice even before she gets pregnant and feels comfortable, allow her. If it’s not part of her practice before pregnancy, avoid inversions.

If Savasana makes the students go numb, try relaxing with the legs straight up the wall. Or prop up the head, shoulders, and back when in a supine position. Another way to relax in Savasana is to do it sideways.

The third trimester is the last stage of pregnancy. The pregnant yoga student is almost there. Her belly is more prominent now, and her body may feel more restricted. To support her journey during this stage, focus on yoga poses that will create more space in her body. 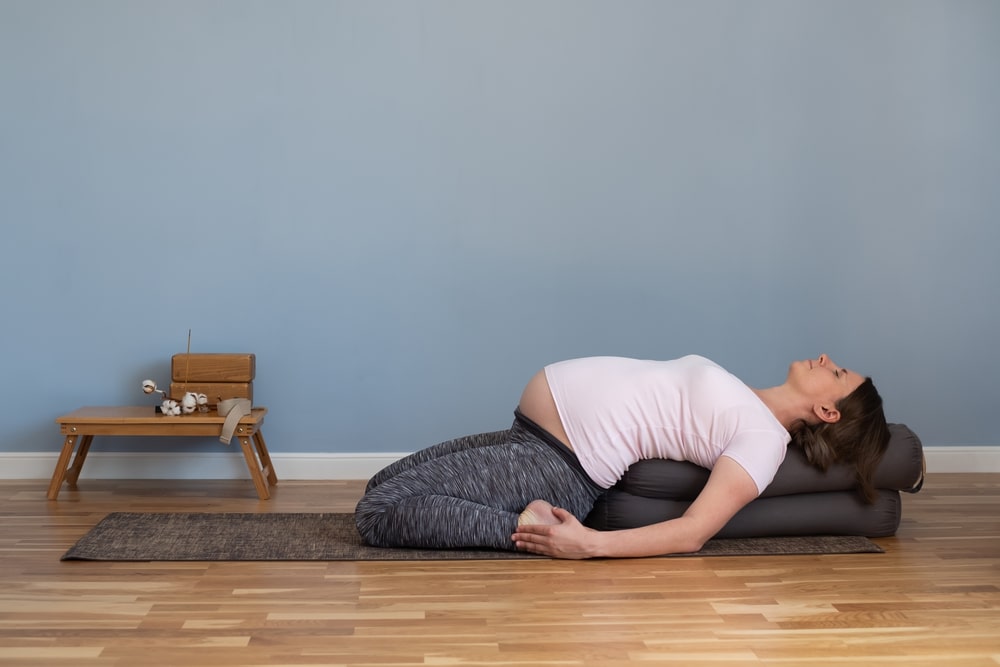 Your pregnant yoga student may now experience shortness of breath and exhaustion. Focus on holding restorative yoga poses that they hold for three to five minutes.

Because of limited mobility due to the growing belly, focus more on Pranayama and easing physical discomfort. But avoid breathing exercises that put pressure on the stomach and require the student to practice Khumbaka.

The level of relaxin, the hormones that relax the body, is now higher than ever. This hormone causes the ligaments and joints in the body to become lax. The pregnant yoga student’s body may not lock their knees and other joints and do the Bandhas.

Focus on the Alignment of the Spine

Pregnant yoga students can do twists but to a minimum. When doing twists, focus more on twisting through the chest to avoid injuring your sacroiliac joint.

Practicing more abducted hip-opening poses will help during delivery. Visualizing the birth while doing these poses will also help the student.

Avoid having the student lie on her back for too long. Prop up the head and back to avoid putting too much pressure in the back, which may cause impingement in the nerves resulting in tingling and numbing sensations.

When relaxing in a side-lying position, put a block or a bolster in between the knees. 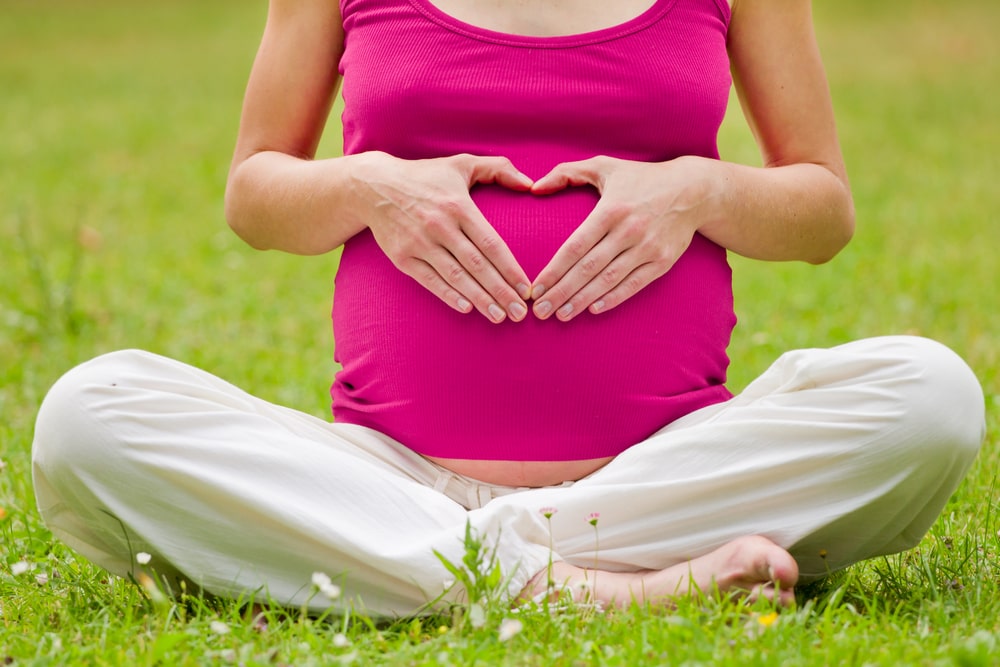 The body goes through so many changes in a lifetime. Most of these changes happen more during pregnancy. Practicing yoga during pregnancy (and after) helps the body and the mind prepare and support the inevitable changes. But of course, ask your doctor before doing any kind of physical exercise especially during pregnancy.